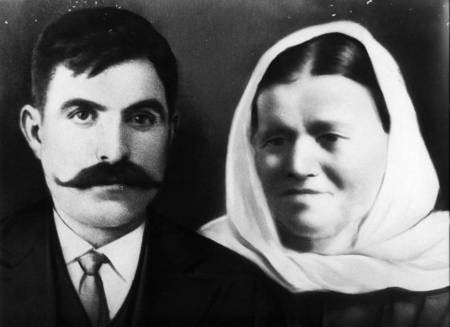 Yeoryi Dimitri Tzortzopoulos was born in Karavas in the 1870's. His parachoukli was Hihlis; not to be confused with the soi, Yeoryopoulos, Ayia Pelagia, who share the same nickname. He married Olympia Tzortzopoulos (Pappayogigi(?), a different soi), and they had 12 children.

4 of the children, all girls, either died in childbirth, or died young. Three died during the birth of the first 3-4 surviving children, whilst Georgia, the last born, died as a 4 year old.

The 8 surviving children were:

Of these 8, five were destined to emigrate to Australia; Katina, Dimitri, Minas, Panayotis, and Costandinos.
In 1896, Yeoryi built the Tzortzopoulo patriko spiti, which lies at the base of the steps that lead up to the murmaro, and the church of Ayios Haralambos, in Karavas. The house was one of the larger houses in Karavas, but, given such a large family, conditions were overcrowded. Three or four children slept to a room.

Yeoryi was a man driven to "better himself.". He maintained large herds of various types of animals. He aquired a large land holding, including a large tract of land in Ayia Pelagia, from which he operated a factory to manufacture tiles. [I wonder whether anyone is in posssession of a photograph of the factory?] He was a good sailor, and a good trader - and frequently sailed from Kythera to Pireaus and back - trading in commodities. He established a successful emporio.

Because of Yeoryi's diverse interest, wife Olympia was forced to work hard. During Yeoryi's frequent absences, she helped to tend the herds, the crops, and the "businesses". By WWI, they had established themselves, and their family, quite well in Karavas.

During WWI, Greece entered a period of political turmoil, which almost culminated in the latter years, in civil war.

Brief background history of political tensions in Greece during WWI

Tension was high between monarchists and republicans - those "for Constandinos" - and those against him. In 1916, in Potamos, Yeoryi, a vassilikos - an avowed monarchist; made the fatal mistake of declaring himself "for the king". An altercation ensured. Later, Yeoryi was taken away by authorities, and brutally bashed with a bourthola - a large elastic like stick. He sustained multiple injures. Particularly debilitating were serious injury to his kidneys. Although he survived the attack, he never fully recovered his health. He was weakened, becoming susceptible to all kinds of infection. In 1918, the Spanish flu epidemic struck Kythera, and Yeoryi succumbed to it.

My father, Con(standinos) Yeoryi (Tzortzo)Poulos remembers, as a two year old, being summoned to his bedroom, were he was lying grieviously ill, and his father saying goodbye to him. Yeoryi kissed him. By the next morning he was dead.

Wife Olympia, was left to fend for 9 children, aged from 20, to recently born. (Georgia, the youngest, would die soon after her father.)

In 1922, with money accumulated by Yeoryi, Olympia sent Dimitri, the eldest son to Australia. In 1928, Panayotis, followed, (sponsored by Capitan Minas, an older cousin, they called barba, who later settled in Molong). [See separate entries for Capitan Minas]. Katina and Constandinos emigrated to Australia after WWII. Many of the other children, had, in the intervening period left Kythera, to find work in Athens and Pireaus.

Olympia died at age 80, in 1960, after falling twice down the aspa, slope, to the rear of the family property in Karavas. Like so many other Kytherian mothers (see separate entries for Peter Venardos, and Dimitri Miller for example), Olympia did not see the 5 children who had emigrated to Australia again; including my father Con(standinos). Dimitri died in a tragic car accident in 1936.

Circumstances of Dimitri's death, and his wedding photograph

Letter from Dimitri's wife, Athena, to Olympia, describing the circumstances of Dimitri's death

The others were too busy establishing themselves in a "new" country to return to visit.

Olympia's life story typifies the hardships of numerous Kytherian women - hard work, death of spouse, deaths in childbirth (often both mother and child, ), estrangement from children at a very young age, breakup of the family. (Imagine "shipping" 11, 12, ..14 year old chidren off to a distant country - knowing that you may never see them again.)