Little secret worth sharing in Greek island of Kythera 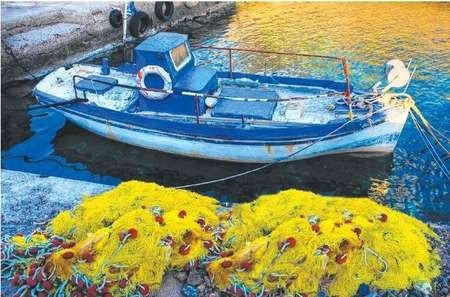 Photograph: Colourful boat moored in one of the many harbours.

View / download a copy of this article in English from the Kytherian Newsletter:

View / download a copy of this article in Greek, as a .pdf:

I have only been on Kythera two days when a local takes me aside to show me his tomatoes and sample his homemade ouzo. “Please don’t write anything about the island,” he pleads. “We don’t want people to know about it.”

If you see the way other Greek islands on the main route are overrun seasonally by hordes of tourists – think Mykonos, Santorini and Ios for starters – you'll know why Kytherians are keen to keep their little secret.

Unlike many other islands, Kythera has managed to preserve its village life and community traditions. You can still see donkeys and old ladies in black with headscarves. Religious festivals are held in caves and they make their own wine, ouzo and olive oil.

In many ways, Kythera is Greece’s best kept secret. Many Australians have never heard of it, but this is the island from which the majority of Greek Australians originated.

Kytherians set up Australia’s first cafes, milk bars, fish and chip shops, cinemas and pubs. They still consider the island “home” and are proud of their heritage. This archaeological treasure island is the site of the largest ancient shipwreck ever discovered, described as “the Titanic of the ancient world”. A tiny sister island off Kythera, known as Antikythera, is where the Antikythera mechanism – an ancient computing device described as the world’s first computer – was discovered.

Kythera will be the focus later this year of a part-Australian funded archaeological exploration dive to search the wreck of British brig Mentor, the ship carrying the stolen Elgin marbles from the Parthenon that sank just off the island’s coast. Part of the Ionian Islands in the region of Attica, far from cruise ship and tourist routes, Kythera sits at the foot of the Peloponnese at the crossroads of three seas – the Ionian, Aegean and Cretan.

At 280 sq km, it’s one of Greece’s largest islands. In mythology, Kythera (Kithira or Cythera) is known as the birthplace of Aphrodite, the goddess of love and beauty.

As I discover, Kythera is like every Greek island woven into one. At the southern end, the capital, Chora, is a stereotypically picturesque blue and white Greek cobblestone-paved town that fits my every Cycladian fantasy. I drive 10km out of Chora and feel like I'm in Tuscany with rolling green hills, green conifers and Tuscan-style ochre stone farmhouses. Then a little further north, I see deserted stone buildings and low beach scrub with rocky red beaches at the end of mountain goat tracks – I could be on Mars.

The starkly diverse natural beauty of this mountainous island, with its valleys, enchanting red and grey volcanic beaches and rugged trails make it popular with walkers, nature enthusiasts, divers, religious, archaeological and cultural tourists. Remnants of medieval times including crusader, Venetian and Byzantine castles, dot the landscape along with Roman- style aqueducts, traces of ancient Sparta and the Phoenicians and churches spanning centuries.

The chapel of St John (Agios Iannos), marked by its huge white cross painted on the cliff face, is built into the cliffside at Kapsali. White monasteries dot the top of tall mounts all around the island. The most spectacular, with panoramic views, is Agios Georgios tou Vouno (St George on the Mount) on the eastern coast, built on a Minoan Peak sanctuary.

Kythera has about 70 small villages and each has its own character. As my tour guide on another island, Paros, says: “Villages have disappeared on most islands replaced by rows of tourist hotels”.

Life on Kythera centres around family and community. Every Sunday, there’s a market in Potamos, a village in the centre of the island. People come from all around to either sell their goods or just to meet up in the square and sit to have a Greek coffee or Sunday mezze.

Only 3000 permanent residents live on the island. Sparsely habited and largely rural, it doesn’t in any way pander to tourists. There are no buses or trains, no big hotels, nightclubs or tourist shops. This is the real Greece.

I stayed a fortnight and came to know the locals, immersing myself in the local history and culture. I hired a car (you can choose a Vespa instead), ate in local tavernas, lingered under platanos trees in town squares drinking ouzo and eating octopus or mezze with the locals, stayed in a family owned house (you can choose from numerous B&Bs) and experienced the local life. Kytherians inundated me with figs from their trees and tomatoes from their gardens. Kytherian wine has a distinctive flavour and is made from “arikikas” grapes. Tess Mallos, author of Greek Cookbook, was from Karavas, and a photo of the ruined houses of Karavas is on the front of her cookbook.

Surprisingly, many Kytherians speak good English, thanks largely to the Australian connection – relatives are coming and going all the time. Every second house in Kythera has a kangaroo emblazoned on a wall signifying that someone from the family has gone to Australia.

Emirates, Qantas, Virgin Australia and Lufthansa are among the carriers flying from Australia to Athens. From Athens connect to Kythera with Olympic Air, or by car ferry departing from the Athenian ports of Piraeus (13E) or from Neapolis (11E).