Photos > Working Life > Marine diver wearing the Exosuit, a cutting-edge piece of diving equipment that allows the user to go as deep as 300 meters and remain there for up to four hours

Marine diver wearing the Exosuit, a cutting-edge piece of diving equipment that allows the user to go as deep as 300 meters and remain there for up to four hours 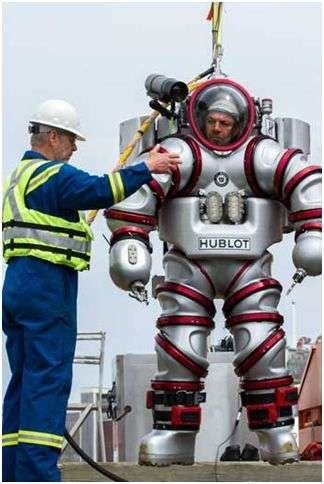 Around two-and-a-half years ago the National Archaeological Museum inaugurated “The Shipwreck of Antikythera: The Ship – the Treasures – the Mechanism.” The exhibition on the wreck that went down in the second quarter of the 1st century BC – taking with it artworks, coins and other artifacts, along with the world’s oldest known analog computer, the “Antikythera mechanism” – was so successful that it prompted scientists and archaeologists to revisit the location where the shipwreck had been discovered, just off the coast of Antikythera in the southern Aegean.

An event was recently organized to mark the closing of the exhibition in Athens, before it travels to Switzerland, where it will go on display in 2015. The speakers at the event included the president of the National Archaeological Museum, Dr George Kakavas, Theodosios Tassios, professor emeritus of engineering at the National Technical University of Athens, Basel Museum of Ancient Art director Dr Andrea Bignasca, and Dr Brendan Foley, chief researcher at the Woods Hole Oceanographic Institution. During the event, a large-scale expedition to the shipwreck was announced, which will run for a month from September 15, bringing together Greek and international experts. With the aid of new technology, the archaeologists and scientists will dive down to the shipwreck, where they are expected to make great new discoveries.

Two studies of the wreck have already been made – by the sponge divers from the island of Symi who discovered the site with the support of the Royal Navy in 1900-01, and French marine archaeologist Jacques-Yves Cousteau in 1976 – but the latest dives are expected to get much closer to the wreck. Moreover, research conducted in 2012 and 2013 between Crete and Antikythera with the help of the Woods Hole Oceanographic Institution and Greece’s Underwater Antiquities Department under its director Angeliki Simosi suggested the possible presence of a second shipwreck in the area. It was this confluence of facts that prompted the new mission this fall. The exhibition currently numbers 378 pieces. Perhaps in a few years it will have even more.

The deepest that the sponge divers who first inspected the wreck were able to go down to was 75 meters, and only for very short periods. But the underwater terrain has changed over the past 2,000 years due to earthquakes. The problem has been addressed with the creation of the Exosuit, currently being tested by scientists conducting studies on marine organisms that live at great depths as part of a broader study on cancer treatment.

The mission is expected to cost between $2 and $3 million and is being bankrolled by Swiss watchmaker Hublot and other Greek, American and Swiss companies.

Speaking at the end of the Athens exhibition, Deputy Culture Minister Angela Gerekou hailed its success, saying that it had helped to boost visitor numbers at the National Archaeological Museum by 81 percent while reviving the interest of archaeologists and other scientists in the Antikythera mechanism.

“I am so excited that I often find myself wide awake thinking of the Antikythera shipwreck. What can be hiding down there? And one more thing: If there have been so many wonderful finds in just the one wreck that we managed to locate, how much more is there to discover in all the hundreds of thousands of wrecks lying at the bottom of the Mediterranean? And just think how such discoveries could change the way we view the ancient world and especially the Greek civilization.”

Dr Brendan Foley is the head of the American section of an international underwater expedition planning to explore the seabed off Antikythera, an islet between Kythera and Crete and the site of one of the world’s most famous discoveries, the Antikythera mechanism, an ancient analog computer.
Handsome and with an impressive physique, Foley could have made it in Hollywood if it weren't for his obsessions with archaeology, scuba diving and technology. Endowed with a profound knowledge in all three areas, the American scientist of the Massachusetts-based Woods Hole Oceanographic Institution was in Greece recently on one of numerous visits for the closing of the exhibition on the Antikythera mechanism at the National Archaeological Museum. He spoke to Kathimerini about the upcoming exploration of the shipwreck.

Foley is part of a large team encompassing different ethnicities and disciplines which has spent the last two years preparing for the challenges ahead. The biggest of these, he says, is whether they will be able to get below the wreck and dig underneath, adding to previous searches of the surface of the shipwreck conducted by the sponge divers who discovered it in 1900 and Jacques-Yves Cousteau in 1976.

“The ship was used for commercial purposes and we can speculate that there are more items to be found from its valuable cargo, which will most likely be very well preserved,” said Foley. “We are also certain of the existence of a second wreck near the one where sculpture, amphorae and the mechanism were discovered. It is 250 meters away and was carrying similar ceramic objects. We discovered it about two years ago. It was obviously following the same route and may have been traveling with the ship carrying the mechanism.”

Foley is also unable to contain his excitement about working with the Exosuit, a cutting-edge piece of diving equipment that allows the user to go as deep as 300 meters and remain there for up to four hours. It will be tested in real conditions within the next few weeks off the coast of Rhode Island, before traveling to Antikythera to be donned by Foley and his colleagues. It is worth noting that early 20th century sponge divers normally worked down to depths of 30 meters although they could get down to a maximum of 75 meters, remaining there for just a few minutes. The cargo is scattered at distances of up to 150 meters from the ship.

“I have been working with the Greek Ephorate of Underwater Antiquities since 2001, when I was still doing my doctoral thesis at MIT,” said Foley. “I participated in the research regarding the ship at a time when new achievements in technology were becoming game changers. And I must say, with no small amount of pride, that Greece is where the newest technology is being tested first. Greece is the largest field of research into underwater archaeology and experts all over the world are anticipating the results.

“I love Greece and, along with Sweden, which is where I live as my wife is Swedish, I consider it my second home,” said the American scientist. “As a non-Greek I feel truly honored to be able to touch the most important shipwreck of antiquity. I am sick of reading such negative things about the country in the foreign media when it is clear that amazing things are being done, such as the expedition to the wreck.

“I believe that the mission will boost morale in Greece and at the same time have a very positive resonance abroad. I am so happy about this.”