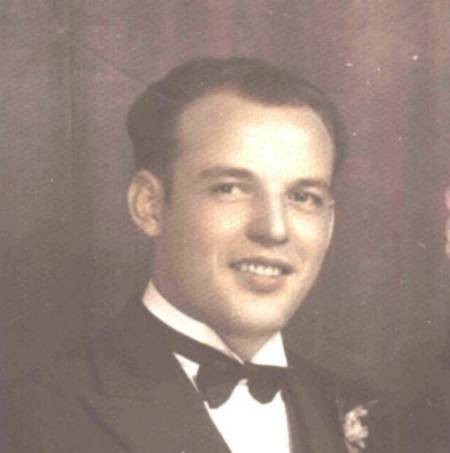 As a young man in his 20's. Taken whilst he was acting as a groomsman at his Uncle Dimitri's wedding.

He died in the North Queensland coastal town of Bargara, on the 13th September 1998.

He attended school in Karavas until the age of 12, at which time he emigrated to Australia.

Theothosios Koroneos - Theo Corones - was sponsored to Australia, as a youth, by his maternal uncle George Coroneos, and aunty Georgia, later of Beverley Hills.

As a youth - (14, 15 years of age) - he displayed a talent for art. He obtained an Art Diploma by correspondence. And he had drawings published in Sydney newspapers, including a memorable portrait of Winston Churchill.

He lost a leg to an infection in his early twenties.

Part of his rehabilitation involved art therapy. He later became quite a famous artist in "Kytherian" circles.

Losing a leg "embittered" him to a significant degree; although he never lost his sense of humour, and sense of "fun".

His disability also limited his options for employment. Eventually he chose a career driving cabs.

He settled in Sydney, and drove cabs for many decades, before attempting later in life to re-establish himself in Karavas, Kythera.

He returned to Australia, and retired to the North Queensland coastal town of Bargara.

Theo in retirement in Bargara. Rainbow lorikeets in hand

Theo had a great sense of humour and an infectious laugh. He was a "soft-hearted" man. He was extremely good with children and animals. (As the particular picture above attests. The rainbow lorikeets in the picture are "wild".)

As a child, and throughout my life, it always made me feel good to be around him.

My brother Phillip, and many of my cousins, including George Krithari, and his sister Ioanna (now, Armenis), and Betty Coroneos, (now, York) - shared this deep fascination with him.

Despite being the opposite of the quintissential "solid", business-oriented Kytherian prototype; which all good Kytherians were meant to aspire to - he commanded a great deal of affection from many Kytherians, and many Australians, of all ages.

Theo as a groomsman at his Uncle Dimitri's wedding

The Kytherian Society of California (KSOCA) Is pleased to invite you to attend our Global Kytherian "ZOOM" III on March 20/21, 2021...

Interviewed by Joshua Kepreotis   After being fed spanakopita and tiropitakia, dipping Karavas’ famous paximathia into Greek coffee and then...

Hi fellow Kytherians, I am a Kytherian (1/2 Dutch) who has never been to Greece but strongly feels the pull...

Thank you to the Kytherian community for supplying me with the name of the father of my...

The Kytherian Society of California is pleased to invite you to participate in our 2nd GLOBAL ZOOM! We are delighted...

Thank you for your reply and details. Appreciate you taking the time to supply this information. Thank...