Photos > Architecture > The House with the Sundial. Sundial above the front door after restoration

submitted by Kytherian Association Of Australia on 04.12.2013

The House with the Sundial. Sundial above the front door after restoration 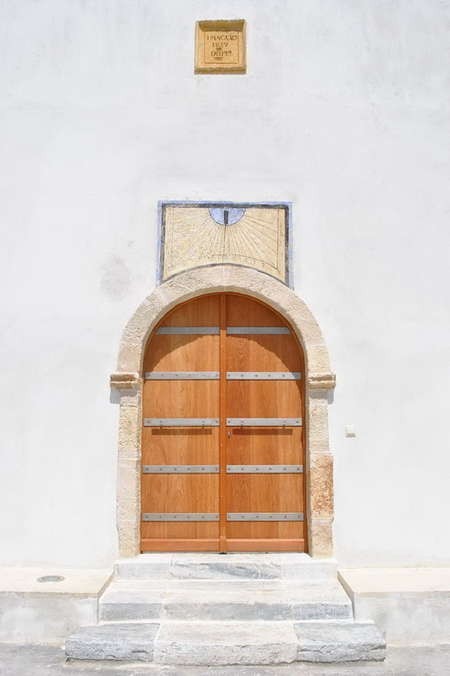 In his book “The Secret Lives of Buildings” the architect Edward Hollis surveys some of the world’s most famous buildings, including the Parthenon and Aghia Sophia, and argues that the soul of a building is not necessarily gauged from its plans or by examining the details of its construction. Rather, its essence is to be found in the layers of history within its walls. When a building changes over time, whether through degradation, destruction or historical changes, any restoration or alteration is, according to Hollis, a “retelling of the building as it exists at a particular time – and when the changes are complete it becomes the existing builing for the next retelling”.

The Cavallini house, better known as the house with the sundial in Avlemonas, is one of the most iconic and historic buildings of Kythera and also one of the most recognisable. It has recently been restored to its former grandeur but in so doing the owner and his team of architects, builders and restorers have succeeded in retelling the rich and, at times, seemingly improbable history of this house.

The story begins in the early part of the nineteenth century. Angelo Cavallini was the Genoa-born captain of a merchant ship sailing between Venice to Constantinople and Smyrna. During one eventful journey he injured his hand and the ship made for the nearest local port which happened to be Kapsali on the island of Kythera to recover from his injuries. Cavallini later returned to Venice but he had found the island so enchanting that he came back and married a local girl, Rosa, who had nursed him. They went on to have a number of children, possibly five sons and five daughters.

At some stage between 1821 and 1827, as the first flames of revolutionary fervour were being fanned in mainland Greece, Cavallini bought a property in Avlemonas from the Kountourioti family upon which stood a modest dwelling. After purchasing the property, Angelo Cavallini hired craftsmen from Crete to upgrade and expand the building. The work was completed in 1827 and included the construction of a sundial over the front entrance.

Angelo lived in the house along with Rosa and their children while using it as a Customs House for the port of Avlemonas. At that time, he served as Vice-Consul for the Austro-Hungarian Empire and also performed diplomatic duties on behalf of the Greek State in a region that still did not officially belong to Greece.

In the decades following the unification of Greece in 1864, Kythera once again became the stop-over port of call for Austrian ships operated by Lloyds of Trieste, with the house at Avlemonas acting as a customs house and commercial trade centre.

After Angelo Cavallini’s death in 1886 his children inherited his estate and divided it amongst themselves with the property at Avlemonas vesting in two of his sons, John and Spyros. By a remarkable twist of fate, Angelo’s oldest son, John, who was a lawyer by trade and one of the Kytherian nobility, had met and eventually married Rosa Cassimatis, who had returned to Kythera after her marriage to Major Patrick Hearn had dissolved. Rosa was the mother of Lafcadio Hearn who went on to become one of Japan’s most recognised poets and writers in the late 19th century. But it was Spyros who was the one who finally lived in the home together with his family.

After the death of Spyros Kavallini in 1932, the home passed to one of his four sons, John Kavallini who had migrated for a time in the 1910's to America. He returned in 1926 shortly before the death of his father and married Georgia Firou from Mitata. They had three children and used the ground floor of the property in Avlemonas as a café which was patronised by captains and sailors from boats docked at Avlemonas when weather conditions did not permit their anchorage in the bay of Kapsali. After John’s death in 1945, his wife Georgia took over the running of the café.

During the Second World War the house with the sundial survived the German bombardment of the port of Avlemonas that preceded the invasion of Crete. It also hosted passing officers and men of the Allied Forces. In fact there are caves near the house in which the Allies had installed a large cannon that sank a German patrol boat that had been sent to intercept them. You can still see traces of bullet holes in the rocks near the property as a testimony to that fierce battle. The house also served as a makeshift field hospital for German soldiers during the war. Andreas Calocerinos once related to the writer how he remembered, as a young boy, seeing wounded men being operated on tables within the house.

After the war, Georgia Kavallini remained alone in the house once her children migrated to Australia. She died in 1990.

The reconstruction and restoration works

Today, the property consists of two separate properties. The property which hosts the famous sundial is owned by John Klaudianos, Georgia’s grandson, who wanted to realise the dream of his mother, Marika Kavallini, which was to see the house in which she had spent her childhood years come back to life.

In order to do this, John commissioned the architectural firm RCTECH to undertake the necessary design, restoration and reconstruction work having regard to the building’s unique architectural features and history. Indeed, their aim was to “highlight the plasticity of the building and to reinstate the positive aura that the building holds”.

The restoration works took about 15 months and involved reinforcement of the masonry walls, removal of the old coatings, installing a new concrete roof slab, maintaining the unique limestone frames around the openings to the doors and windows, coating the building with a new external coating, new plastering works and undertaking full waterproofing.

Restoration of the Cavallini Sundial

Last but not least the owner’s brief called for the restoration of
various architectural elements on the building and, most notably, the famous sundial. For this delicate work an expert conservator with specialist knowledge and 30 years of service in the maintenance of the antiquities of the Parthenon, was engaged to oversee the restoration works. The aim of the restoration was to protect the sundial from additional wear, revive its colours and reinstall it as a functioning sundial.

The result, as the various photos depicting the house before, during and after its extensive restoration attest, is simply outstanding. The intervention is characterised by the innovative use of materials and colours, attention to detail and painstaking restoration works to produce an authentic restoration of the fabric of the building and at the same time preserving its distinctive architectural features. The house with the sundial, in that quiet corner of Avlemonas harbour, will forever remain a monument to time and memory on Kythera.

Its restoration by John Klaudianos, a descendant of the original Cavallini family, is a story of passion and determination to complete the sensitive retelling of the history of an iconic building.

Note: The sources for this article include the website of RC TECH; material on the Kythera family net website; Peter Vanges’ Kythera, and an extensive history of the house from visit kythera

on a clear day from the lower half of the island you can see one of our neighbours.. CRETE ...in...