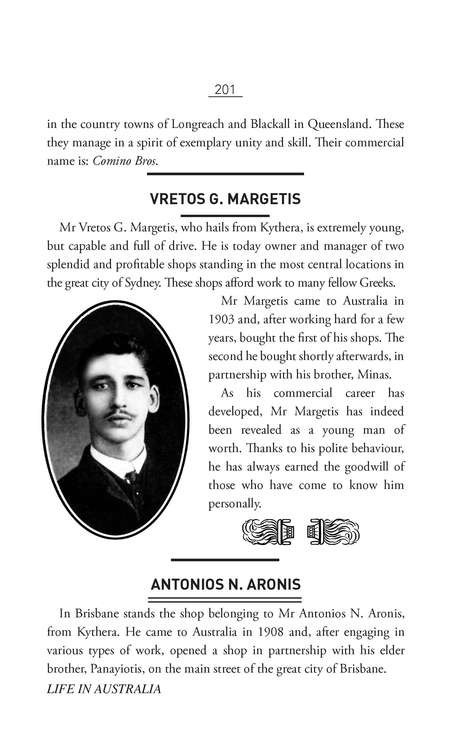 Mr Vretos G. Margetis, who hails from Kythera, is extremely young,
but capable and full of drive. He is today owner and manager of two splendid and profitable shops standing in the most central locations in the great city of Sydney. These shops afford work to many fellow Greeks.

Mr Margetis came to Australia in 1903 and, after working hard for a few years, bought the first of his shops. The second he bought shortly afterwards, in partnership with his brother, Minas.

As his commercial career has developed, Mr Margetis has indeed
been revealed as a young man of worth. Thanks to his polite behaviour, he has always earned the goodwill of those who have come to know him personally.

His name is spelt Vretos in Life in Australia but I have always spelt it Bretos.

He was married in 1925 at the Agia Triatha Church Bourke St Sydney.

Studio portrait of Theodora Lianos on her wedding day

Studio portrait of Theodora Lianos on her wedding day, with mirror image

Bretos Margetis at the wedding of Nicholas Sophios to Aspacia Lianos c, 1927

He rejoined the Committee from 1926 - 1928, when he fulfilled the role of Secretary.

In 1924, a year before his marriage to Theodora Lianos, Bretos had acquired two cinemas in the outer Sydney suburb of Fairfield. These were called the The Crescent and The Butterfly. While Bretos looked after his restaurant in George Street, Sydney, Theodora used to travel to Fairfield to supervise the running of the cinemas. This lasted until 1928 when Margetis left cinema exhibition.

He lost everything in the Depression of 1929, but undeterred, and with a wife and two children to provide for, he took various jobs around the country, finally settling on employment with Harry Notaras in Canberra, in 1940. He brought his family to live in Canberra. Mr Notaras had two cafes,and sold one to Bretos, which he called Victor's Rotary cafe. He and Theodora worked there, and put their children George and Vasilia through University. Both graduated in Pharmacy.

In 1956 the Cafe was sold to Coles, and he and Theodora moved to Sydney, where he bought a shop for George in Redfern, and opened a shop for Vasilia in Waverley, and another in Caltex House in Kent Street, City. His happiness was complete when they moved into their own home in Rose Bay in 1961, but he did not live to enjoy it, as he died suddenly, after an operation in hospital on November 12 1961.

Bretos Margetis lived his life as the eternal optimist, whereby the glass was always half full.

He was a great Dad.

He was a great Dad,who loved nothing more than a good sing-along around the piano with Theodora playing while he sang songs from opera ,especialy La Donna Mobile.He thus instilled a love of music in his children,who both learnt the piano and Vasilia singing,so his home was always full of music.What memories he left behind.