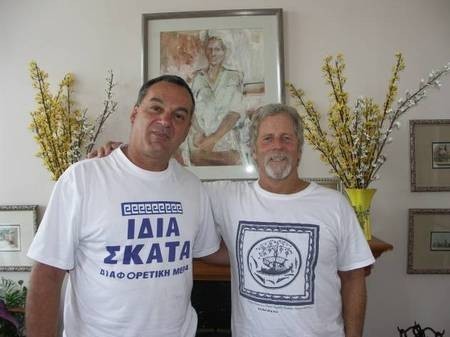 Went to have coffee this morning with Connie and Chris Hillman, in Ventura, California.

Connie was the former manager of Elton John, and Chris is a Rock & Roll Hall of Famer - guitarist with the Byrds, and later with Monassa - (with Stephen Stills). [...Mr Tambourine Man .......& There is a Season, Turn, Turn, Turn, etc etc ...]

Thats me and my mate Chris in his lounge Room.

Team Leaders, USA, Vikki Fraioli & Terry Keramaris and I devised a term K-synch - meaning Kytherian synchronicities, whereby all kinds of synchronicities occur, and divine adventures unfold - as you chase increasing connection with the Kytherians around the world.

In this case this was a great adventure - meeting one of the legends of rock and roll.

The connection - Terry and Connie are on the same Orthodox Church Committee together, in Santa Barbara, California.

The Byrds, led by Roger McGuinn, pioneered folk rock and later country rock. With their high harmonies, ringing guitars, and obsession with studio technique, the Byrds also became the sonic model for many rock bands, including the Eagles, Tom Petty, and the latter-day Fleetwood Mac.

The band was formed in summer 1964 as the Jet Set and toyed with the name Beefeaters before settling on the Byrds, misspelled à la the Beatles. A few months later, the Byrds were touted as “L.A.’s answer to London.” After signing with Columbia in November 1964 they recorded demos released years later as Preflyte. In January 1965 they met Bob Dylan who provided their first hit, the #1 “Mr. Tambourine Man.” The single had Dylan’s lyrics, a guitar hook, chorus harmonies, and a rock rhythm section: folk rock. Mr. Tambourine Man, released in June 1965, went to #6.

In 1966 the Byrds had a major hit with the anthemic “Turn! Turn! Turn!” - a Bible passage set to music by Pete Seeger. But the Byrds failed to achieve such commercial success for the rest of their existence. By the time Fifth Dimension was released in summer 1966, Gene Clark had left to embark on a solo career. His departure, plus their somewhat avant-garde LP, marked the start of the Byrds’ “space rock” phase. The hit single “Eight Miles High” (#14, 1966) from Fifth Dimension solidified their new style. It was also one of the first records to be widely banned because of supposedly drug-oriented lyrics.

Tensions within the band increased and occasionally erupted into onstage fisticuffs. The group managed to stay together long enough to see 1967’s Younger Than Yesterday released and to record the countryish followup, The Notorious Byrd Brothers, but by the time the later album hit stores in January 1968, Crosby and drummer Michael Clarke were both gone. Crosby went on to superstardom with Crosby, Stills, Nash and Young, while Clarke joined the Dillard and Clark group. McGuinn and Hillman soldiered on with new drummer Kevin Kelley and International Submarine Band singer/songwriter/guitarist Gram Parsons. Parsons took the Byrds even further into country territory; Sweetheart of the Rodeo, recorded in Nashville and released in the fall of 1968, remains a cornerstone of the country-rock movement that spawned groups like the Eagles and Poco in the ’70s and Uncle Tupelo in the ’90s.

By October 1968 McGuinn was the only original Byrd remaining, as Parsons and Hillman left to continue their country experiments with the Flying Burrito Brothers. He kept the patchwork Byrds alive through 1973 with a series of partners, most notably guitarist Clarence White, a session veteran of several previous Byrds albums. The various combos toured steadily and put out a series of mildly successful albums, including the double live and studio set Untitled, which contained “Chestnut Mare,” one of McGuinn’s signature tunes. After 1972’s Farther Along, however, McGuinn disbanded the group to record a reunion album with Crosby, Clark, Hillman, and Clarke in 1973. Simply titled The Byrds, the album flopped and the name was laid to rest.

McGuinn subsequently embarked on a low-key solo career. In late 1975 and early 1976 he was prominently featured in Dylan’s Rolling Thunder Revue. With fellow Revue trouper Mick Ronson producing, he recorded Cardiff Rose. In early 1977 he assembled a new band, wryly dubbed Thunderbyrd, and recorded an album of the same name. By late in the year he was playing occasional dates in tandem with Clark, and the alliance soon expanded to include Hillman as well. In 1979 the three recorded their self-titled debut disc and enjoyed some pop success with “Don’t You Write Her Off” (#33, 1979). In 1980 McGuinn and Hillman returned with City, before the band gradually fragmented, and McGuinn took up his solo career again. It was more than 10 years before he released another LP. Back From Rio, with assistance from admirers such as Tom Petty and Elvis Costello, reached #44.

The same month the LP charted, January 1991, the Byrds were inducted into the Rock and Roll Hall of Fame. McGuinn, Hillman, and Crosby had been at odds with Michael Clarke and Gene Clark for touring using the Byrds name. To prevent them from doing so, in 1989 McGuinn, Hillman, and Crosby had played three dates to establish their legal right to the name. A year later they recorded four songs for inclusion on the four-CD The Byrds anthology. Four months after the Hall of Fame ceremonies, Gene Clark died at age 46; in 1993 Michael Clarke died of liver failure.

Beginning in 1996, Columbia/Legacy began a lavish Byrds reissue series, eventually re-releasing the entire catalogue (minus the reunion album, which had been recorded for Asylum) embellished with multiple bonus tracks, including an entire disc’s worth of unissued recordings with Untitled. Along with the reissues came the previously unreleased Live at the Fillmore - February 1969. McGuinn, meanwhile, directed his energies toward recording solo versions of obscure folk songs, which he made available as MP3s on the Internet as part of his “Folk Den” Web site.

from The Rolling Stone Encyclopedia of Rock & Roll (Simon & Schuster, 2001)