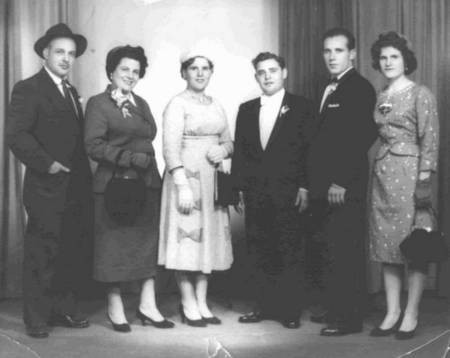 Photograph taken at the wedding of Nick Coroneos, to Beryl Palmer, on the 12th June 1960.

The children of Triunduphilo Koroneos, long-standing mayor of Karavas, and Yeoryia Mentis, Karavas.

In birth order: Theo, Angie, Nick, Helen, Nick, Manuel and Stella.
The second oldest child, Stamatoula (Toula) did not attend the wedding. She lived in Athens, and later Germany, before emigrating much later in life to Australia.

Theo Koroneos (Corones), later to lose a leg to infection, and become a prominent artist of Kythera. He drove taxi's in Sydney for many years, lived for some years in Kythera, before returning to Australia, and retiring to Bargara, in Northern Queensland.

Nick and Helen came to Australia together. They were sponsored by Uncle Nick and Aunty Pat Coroneos of Blacktown shop, and North Parramatta fame. A submission detailing the story of their emigration, written in the Dubbo Liberal, exists on the website.

Nick would settle in Gilgandra, and finally move to Wentworthville a western Sydney suburb. He died at the tender age of 44.

Helen would marry George Calligeros, and they lived in Dubbo, NSW, for all their married life. Helen has recently moved to the ACT to live.

Manuel moved to Bankstown in Sydney, and worked in the building trade, before purchasing the Warren Fruit shop from Peter (Tzortzo)Poulos's widow Aryiro (Sylvia) Poulos. He eventually moved to Sydney, where later in life he became a very successful greyhound owner and trainer.

Stella moved to Dubbo were she married Haralambos Logothetis, Harry Logus. Harry practised his trade as a tailor in Dubbo. Later they would purchase the Gilgandra Fruit Shop from brother-in-law and sister, Con and Angela Poulos. When the children reached university and working age the family moved back to Dubbo, and eventually to Canberra.

Toula, later married a Vaggis (Vanges). As stated above, later in life she moved from Germany to Australia, where she was tragically killed in a road accident near Bathurst, New South Wales, on the way to visiting her younger brother and sister, Manuel and Voula, in Gilgandra, NSW. She was 49 years of age. Her two youngest sons, George and Nick, then aged 21 and 19, were also killed in the car accident. The date was the 25th December 1975. Older brother Panayotakis - always known as Takis, had returned to Athens. He was the sole survivor of the Vaggis family.

Photograph of Takis on his wedding day