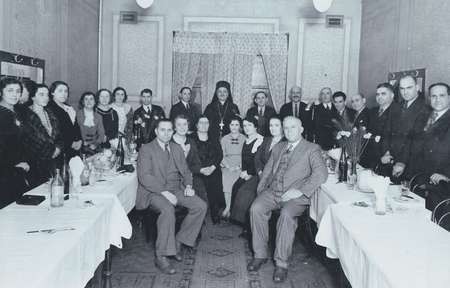 I have numbered the attendees to this function in another photograph. The numbers in this entry refer to the numbers used there.

Now that we have named all of the attendees, can you tell us more about their lives? By some chance, are you a descendant of one or more of the persons in this photograph?

4 Ninette Mavromatis (Wife of George, no 21)

9 Bishop Nikodimos An archimandrite* priest. Upon returning to Greece he was shot and killed by the 'ardutes' during the Second World War.

11 George Cominos, Vice-President of the Kytherian Association of Australia, 1926-1928, and long standing Committee person during the 1930's

17 Elias Bezannes, owner of the Bhema newspaper at the time.

24 Emmanuel Mavromatis** - owner of the Sydney Cafe, and long standing Treasurer of the Kytherian Association of Australia in the 1920's and 1930's.

* An archimandrite (literally, "chief of a sheepfold") is a celibate priest who has been elevated to an honorific rank, one level lower than bishop.

**Emmanuel Mavromatis (the family name was changed to Mathers), served as the Treasurer of the Kytherain Association for ten years from 1928-1938 - the critical ten years in view of the impact of the impact of the Depression on Australia. He remained on the Committee in 1939-1940, and undertook the role of Treasurer again from 1940-1944. This was a prolonged period of active service on behalf of the Kytherian Brotherhood / Association.

For more on the Eastern Orthodox Church in Australia:

The Eastern Orthodx Church in Australia. From the BIMPR series