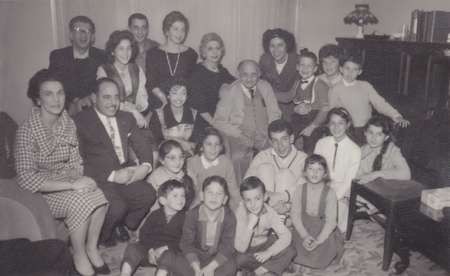 Standing: Stella and Coralia. Seated:Theodora,Diana, and Aspacia
Diana (christened Diamantoula)was born in Sydney on the 4th August 1920,the youngest of five sisters and second youngest of the eleven children of George and Agapi Lianos from Kythera.
As can be seen by the above photograph, she showed a flair for dressing at an early age and when she grew up went to the East Sydney Technical College to learn dress designing. But she soon found a job in a dress factory instead. It was nothing for her to take a length of material and drape it around herself, pin it into shape with large safety pins and with smart shoes and handbag was ready to go out and party with her friends. Diana leaving for America. Diana is standing third from the right, next to Papou. George and Diana on their wedding day

Grandfather with most of his grandchildren during Diana's visit with Charles and Liana.1960.

In 1965 she made another trip to Australia while doing a world trip this time with Robert and Brian.Her father had died suddenly in 1962 and she was unable to reach Australia in time. George continued his research into cancer at the Research Centre in Philadelphia, and Diana opened a small travel agency with a cardboard cut-out of a kangaroo in the window. The children had all completed their educations.Robert and Brian followed their father into research,Liana into finance,and Charles into the high tech field.

George and Diana celebrated their Ruby wedding anniversary at Uncle Tony's home and what a night it was. Everyone who was able came --aunts,uncles, nieces and nephews many who were married and had their own children.

One evening George and Diana were invited to a formal dinner given by the C.S.I.R.O,so it was full dress for both of them. Towards the end of their trip a party was held at my mother Theodora's house at Rose Bay ,and it was great for all to be together again. But this was to be their last trip to Australia.
In the early part of 1990 George died suddenly. Diana was heartbroken and could not be consoled and she too died suddenly on 6th of September in the same year 1990.