Photos > Diaspora Vintage Portraits/ People > George Poulos with his daughter, Aphrodite, and son, Nik, outside his milk bar in 2014.

George Poulos with his daughter, Aphrodite, and son, Nik, outside his milk bar in 2014. 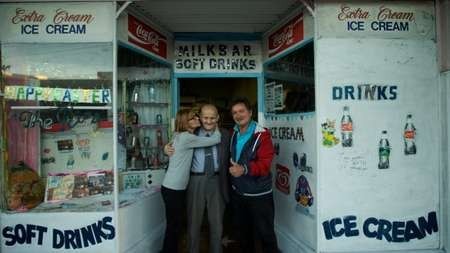 "It gave him something to do — to get up in the morning and do things." Photo: Wolter Peeters

Farewell to George Poulos, the man who made milkshakes in Summer Hill for 63 years

He was a soldier and a hero. His family called him "the General". He made milkshakes in Summer Hill for 63 years and not once did he turn up for work in anything other than a long-sleeved shirt and tie.

On Tuesday last week, George Poulos opened The Rio, his famous old milk bar in Smith Street as usual. At 92, Mr Poulos was frail. He may have spent more of the day sitting on his sofa bed behind the shop than at the counter, where he displayed a Greek flag and a photograph of himself as a young soldier. Perhaps he watched a video — he liked John Wayne movies, especially Rio Bravo, and I Love Lucy and M*A*S*H. Perhaps he made someone a milkshake. Perhaps he didn't. Most only came to gawk — at the vintage shop, its retro signage and the old man and his scant range of confectionery. Few spent money.


George Poulos with his family behind the counter of The Rio in its golden years. From left, Stavroula, Nik, Aphrodite, George holding Margaret and George's father, Philip. "We used to open until 11 o'clock waiting for the picture show to come out," says Nik Poulos.

Perhaps Mr Poulos closed early: he hadn't been well lately, according to his son. But earlier in the month he'd begged to get out of hospital. "He needed to go back and open his business," says Nik Poulos, who arrived at The Rio on Wednesday afternoon to discover it was locked up. He jumped over a back fence and broke in to discover his father had died some time after he had closed the day before.

The business was his whole life, says Nik Poulos. "He'd be open until 10 o'clock at night sometimes just for one person to come in and get one drink. It just kept him alive; he didn't make any money from it."

It was not always so: once, George Poulos called The Rio "the goldmine". Through the '50s, '60s and '70s, the milk bar had a symbiotic relationship with the old Summer Hill movie theatre.


George behind The Rio counter. Once, the shop was a goldmine and people queued out the door for milkshakes.

"We used to open until 11 o'clock waiting for the picture show to come out," says Nik Poulos, who grew up working behind the counter. "They were three deep there waiting for milkshakes. We had the old-fashioned seats there. We had people like Johnny O'Keefe and Lionel Long (come in)… I was the f-- Fonz before the Fonz was even thought of. The best milkshakes in the whole of New South Wales were made by my Dad."

George Poulos sailed into Sydney in 1952 on the Cyrenia, a former troop carrier converted into a migrant vessel. He'd come from the family village, Parori, in Northern Greece. He'd fought in World War II and the Greek Civil War and, according to his son, was a hero. "He looked like Rambo; he saved our whole town during the Civil War when the Communists tried to take over."

In Sydney, George quickly went into business with his uncle, Chris, and his father Philip, who'd already been in Australia for more than a decade cutting cane in Queensland. George soon enough sent for his wife, Stavroula, son Nik and daughter Aphrodite. Another child, Margaret, was born nine months after the family was reunited.

He fiercely protected his girls. "(He) still lived like if he was in Greece," says Nik Poulos. After Stavroula died in 1998, a female in-law would send him letters at Christmas. He refused to open them because she was a married woman. "That's how old-fashioned my Dad was."

He was also independent and determined. While he was alive, the shop would remain open. "It gave him something to do — to get up in the morning and do things," says Nik Poulos, who in later years would come from his home on the Central Coast to visit his father and take him to the local supermarket to replenish the little stock he had sold. "He literally worked until the last day."

The shop though, was always more than simply a job. "It offered him a sense of presence in a new land because those in the local community knew him," says Macquarie University historian and curator, Leonard Janiszewski, who, with his colleague Effy Alexakis, interviewed Poulos for their project "In Their Own Image: Greek-Australians". "He remained with the shop, the things that he knew; he knew that he was a recognisable character within his urban scene. George said, 'people know me around here, I've been here so long'."