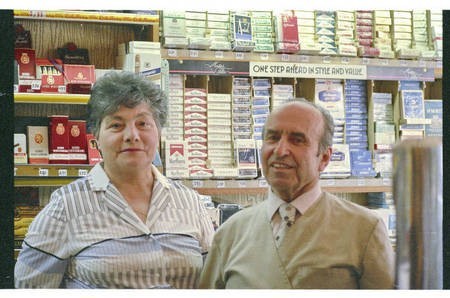 This article appeared in the Sydney Morning Herald on the 17th of November, 2003. We were not able to contact the authors, who are also the subject's children, for their permission, but hope that they will have no objections to us displaying here their homage to their father.

Special service for all, premier or pauper

Regular fans of Jack Patty's hot chocolates thought nothing of driving from Penrith or Canberra to his Katoomba cafe to satisfy their cravings.

But he knew that the fame of his hot chocolates had spread to the other side of the world when European tourists came into Aroney's Cafe in Katoomba asking for one.

Jack made his famous drink in an old-fashioned milkshake container and steamed it on the coffee machine's frother. It was a rich brew - chocolate syrup and Cadbury's chocolate powder with full-cream mild (no water), topped with whipped cream. And he gave you the container with the other half for seconds.

But it wasn't just the hot chocolates that marked Jack's 52 years as proprietor of Aroney's. It was his old-fashioned service and happy smiling face that customers most remember and which his family will most miss after his death at the age of 91. Jack left his family home in the small fishing village of Kapsali on the Greek island of Kythera in the early 1920's when he was about 12. He arrived in Sydney not speaking a word of English and joined his older brother George working in Bundaberg and Toowoomba, before taking over his own business in Katoomba in the mid-1930s.

During its early days as a fish restaurant, working days at Aroney's began at 2am with a visit to the Sydney fish markets. Aroney's supplied its fresh fish and oysters daily to many guest houses in Katoomba and Jack's hands peeled countless bags of potatoes and scaled innumerable ice-cold fish.

It was an era of old-time music and cabarets, when late night suppers were served to Australian state premiers in Jack's upstairs dining room. All customers were treated with the same respect, whether it was Ben Chifley, Gough Whitlam, Brian Henderson or a penniless local from the Eldon Hostel.

The fish restaurant eventually took its toll on Jack's hands, which became arthritic, forcing him to put away the violin that he so loved to play, although he passed his passion for music onto his children.

He closed his upstairs dining room in 1950 and in 1963 transformed the business into a cafe-restaurant, specialising in mixed grills, toasted sandwiches and hot chocolates. When Jack retired in 1988 at 76, the late Neville Greenwell, a Katoomba pharmacist and regular customer for 50 years, recalled buying six dozen sandwiches from Aroney's very late one New Year's Eve.

Locals and visitors have always regarded Aroney's as one of the top restaurants in Katoomba because of the high standard of its meals and its excellent service, delivered over very long hours and always with a smile.

Indeed, Paul Thomas, who took over the business in 1988, recognised that he had bought an institution.

When he retired, Jack said he would most miss the people he had made friends with over the years through the business. Many of those people have expressed their enormous love and respect for Jack, saying how big-hearted he was, and how hospitable.

Poppy, Jack's wife of 55 years, and his son Manuel and daughters Mary and Anna will remember a man whose generosity, wisdom and integrity knew no measure.