Nicholas P Aroney (i Liapos), and his son Peter Aroney. 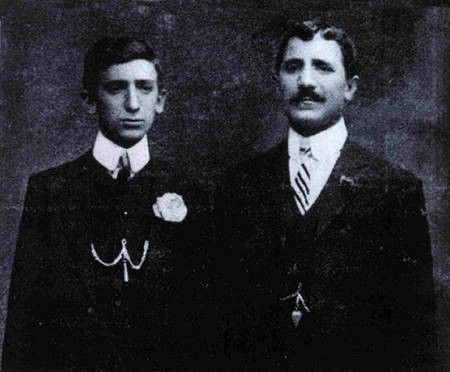 This biography is part of a collection from "Life in Australia". Text page 144; photograph page 145:

North of Sydney and lying on a straight line are the country towns of Moree and Inverell, distinguished for their wealth. Moree is particularly noted for its healing sulphur springs, to which many resort for a cure, even from as far afield as England.

In these country towns are located five Greek shops, two in Moree and three in Inverell, which belong to the enterprising Greeks from Kythera, Messrs. Nikolaos Aronis (or Liapis) and to the brothers Evangelos, Leonidas and Basilios Tzentzou, sons of Georgios Tzentzou. With unity and love as their corner stone, they very skillfully manage these five shops, which are to be numbered among the few very lucrative shops in Australia. Throughout their lengthy residence in these country towns, Mr. Aronis and the Tzentou brothers have been notable for their peaceable, affable, attentive and moral behaviour, factors that have contributed greatly to the success of their business and to the country towns themselves.

These Greeks have always been an example of patriotism and have on numerous occasions helped very numbers of compatriots on their way to setting themselves up successfully.

During the first years after their arrival in Australia, they endured a great number of hardships, settling in the unfamiliar cities in which they established their various businesses, which they afterwards sold to fellow Greeks, who today derive considerable profit from them. Their general progress is bound to attract the attention and admiration of the Greeks throughout Australia and serves as an example of this phenomenon to all.

Mr. Aronis is to be classed among the Greeks who enjoy the esteem and love both Greeks and very many Australians, with whom he has cultivated great and brotherly friendship. The commercial name of the company of N. Aronis and the Tzentou brothers is: Peters & Co.


This biography is part of a collection from "Life in Australia" published in 1916 by John Comino. It is an important book as it was one of the first Greek books published in Australia for the Greeks back in the homeland. If they needed any more convincing of the golden opportunities awaiting them in Australia, it probably helped create interest amongst young Kytherians and other Greeks. Each of the men portrayed in the book paid for the honour, which, considering their reputation for thriftiness, must have made the decision a hard one for many a Kytherian.

The Kythera-Family.net team, with the support of the Nicolaus Aroney Trust and other generous sponsors, has undertaken to transcribe the entire book for the website and to translate it into English for the non-greek-speaking diaspora community. We hope to also produce a printed version of the translation of Life in Australia sometime in 2005.

For valuable information about the historical background of the publication of Life in Australia, please read the entry by Hugh Gilchrist:

The history of I ZOI EN AFSTRALLIA