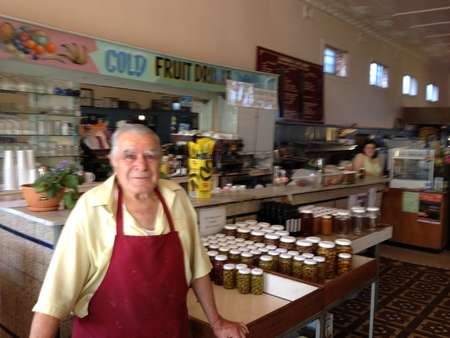 Pages 140-142 in the book, Old-Timers. Magnificent stories from mighty Australians.

To read the remainder of the Paul Calokerinos vignette - BUY the book, Old-Timers. Magnificent stories from mighty Australians

His hands move swiftly, confidently, for he has consrructed this masterpiece many, many times. To watch him at work is to enjoy his art.. . . the art of feeding a hungry human. Not with a stir-fry, pasta, tapas, omelette or quiche, for the person waiting to demolish his devoted effort is a bloke from the bush, and he wants a 'proper feed'. He has put his trust in the professionalism of the cafe owner, to meet, and perhaps exceed, his appetite's expectations, for he knows the Greek man will know - as so many of his countrymen have known for more than half a century - exactry what an Aussie country bloke wants on his plate.

Half a bullock is sizzling on the hotplate. The smell of the onions frying around it is torture to the waiting man, whose sweat-stained Akubra sits on the floor beside his well-worn RM Williams work boots, like an obedient dog. The Greek man knows what that heavenly ftagrance will be doing to him, and represses a small, knowing smile as he gets on with his work.

From the comer of his eye, he sees the customer demolish the bread roll like a king tide devouring a sandcastle, and again he enjoys a little private smile, which this time is slightly sad. His magnificent homegrown olive oil sits unwanted on the table -the man has naturally opted for the butter pats. Only city visitors seem to appreciate the significance of the choice offered. One day, maybe not in his time, but one day, all Australians will go for the product he is so proud of. Still, the puzzled expressions of the bushmen, when glancing at the bowl of oil, always brings a little humour into his day.

On an oval plate that would hold a far-sized dog, he deftly arranges the salad-traditional, of course: lettuce, tomato, onion, beetroot, com kernels, grated carrot. He pushes all that closely together before patting a generous serve of mashed potato nearby - the edible bed that the sizzling bullock will soon recline upon. Bewdiful! A match made in heaven. But wait, there's more A cloak of golden brown onions for the gorgeous beast, a perfect fried egg placed reverently on top-bright yellow yolk the hue of happiness. Then the jewels in the crown are flnally added: at least 53 fat, golden chips - proper chips - proudly positioned on the fourth floor of this culinary edifice. A big piece of baked pumpkin stands to attention, glued to the beel half a pannikin of peas are pushed into the mash, while six mushrooms take up the opposite side, like bollards at the edge of the plate. Every centimetre of crockery surface is covered. It's quite amazing, but it's not finished . . . Ah, the piece de resistance . . . a fried pineapple ring-for 'something sweet' - is put into place with the skill of a CWA cake decorator. No brand-new father, no Olympic gold-medal winner, could outshine the expression of immense pride on this architect's face, as he carries the tray bearing that splendid meal to the hungry bushman. Is that a tear in his eye as he looks up at his lifesaver? Generosity-the pleasure of giving - radiates from the Greek man's face, savouring the spellbound expression of his guest as he gazes in sheer wonder at the sight before him. Naturally, he grabs a chip firsr, but before consigning it to its 'interior decorating' career path, he manages a heartfelt and eloquent: 'Thanks, mate. That'll shut the old tapeworm up.'

With those poeric, beautiful words threatening to overwhelm him, the Greek man gives a small bow, saying, 'Enjoy your meal,' and retums to his beloved hotplate. At this point he often enjoys a little speculation as to whether the customer will manage to consume his entire construction, but seeing this chap is big enough to hold a water buffalo out ro pee, he has a pretty good hunch that his plate will come back almost clean enough ro pur srraight back into the cupboard.

Paul calokerinos glances around his cafe. The other customers are all happy with their gigantic hamburgers, generous toasted sangers, gorgeous cakes, pots of good coffee or delicious malted milkshakes. He doesn't do so many of the traditional, Greek cafe big meals lately. Except for his customers who are on the land, still doing hard physical work, he's found that most people eat less these days, because they work less.

continued on pages 143-152 in the book, Old-Timers. Magnificent stories from mighty Australians.