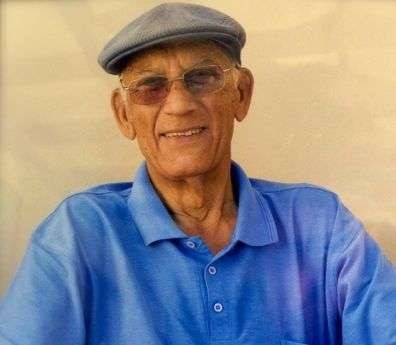 Peter George, – an Australian Greek more than a Greek Australian.
He loved Australia and marvelled at its beauty.

To acknowledge the blessings and opportunity this great country bestowed upon him as a 15 year old immigrant boy, survivor of the devastation of the Great Depression and World War 2, the adult Peter contributed time serving on a number of community organisations.
These included the Merriwa Apex Club; Merriwa and Dubbo Lions Clubs ; Merriwa Volunteer Rescue Squad; Board member of Merriwa District Hospital; Dubbo Water Watch Group; Orana Law and Order Forum and the Dubbo City Chamber of Commerce and the occasional drink at the Merriwa RSL after hours.

His greatest pleasure to community was his service and dedication to his faith and this very Church, Our Lady Panagia Myrtidiotissa. The spiritual connection for Peter was strong. For years he stood in the Psaltiri and chanted during Divine Liturgy. He strove to understand his faith, and for enlightenment undertook studies of Modern and Ancient Greek to better interpret the scriptures as they were written over the past 2000 years.

Peter stayed connected to his beloved island home Kythira, especially after his retirement, returning on a pilgrimage every year. This was eclipsed, however, by the trip to Jerusalem and the Holy Lands. Filled with Spiritual energy, he overcame failing health, to proudly climb all the steps and walk the path of Christ without getting tired. It was a personal milestone and fulfilment of a life- long ambition.

Peter was not your typical Greek migrant. He assimilated seamlessly into Australian society, undertook study to become fluent in English and progressed in the business world. Even though he and his wife Bess worked 7 days a week for over 20 years in the famous Peter George’s Merriwa Café, they always found time for family Sunday excursions and an annual week long holiday at Nelson Bay.

With the move to Dubbo, Peter George built a new life. His greatest success was going to work and loving it. Peter’s professional ambition since his Nyngan days in the 1950’s was to own a Gun Shop in Dubbo. Carrington Firearms was an opportunity to finally join his love of shooting and fishing, emerging as a highly respected professional in a highly competitive industry.

On a more personal level:
His best mate became his brother-in-law, Tony Panaretos.
His greatest sense of duty was to his mother, Kirani and sister Eleni.
His greatest heartbreak was when his nephew, Tony Maselos, died from leukaemia
His greatest privilege was baptising his 3 Godchildren.
His greatest challenge was raising 3 strong willed daughters. Yet he gained the sons he never had leading to….
His greatest pride - his 7 grandchildren! They gave him the incentive and that extra will to live longer. In later years he would express his love and pride to anyone and everyone who would listen!
Above all else his greatest passion was that for his wife and soul mate, Bess. Together they were an inseparable team; united by marriage; working side-by-side and genuinely devoted to each other.

And now we are gathered here to honour him, applaud him and thank him for the time he walked among us and made our lives all the richer for having known him.

You will be greatly missed Peter George. May you rest in peace.