submitted by Kytherian Biographies Project on 28.02.2012 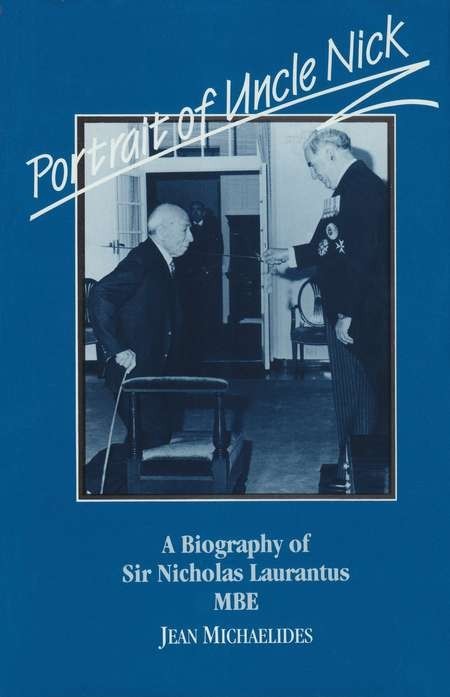 
Sir Nicholas (Nick) Laurantus (1890-1980), businessman and philanthropist, was born on 5 February 1890 on the island of Kythera, Greece, third of twelve children of Panayiotis Lourantos, contractor, and his wife Angeliki, née Marsellos. After seven years of schooling, Nicholas helped his father as an apprentice carpenter and blacksmith. Letters from relations overseas stimulated his desire to emigrate. When a cousin at Grenfell, New South Wales, offered to look after him, Nick and his younger brother George sailed for Australia in the Seidlich, reaching Sydney on 1 November 1908.

George remained there with friends. Nick began work in the Thermopylae Café at Grenfell for 7s. 6d. a week, with accommodation above the shop. He determined to learn English in three months and kept a dictionary beside his bed, constantly checking and memorizing new words. 'I knew I was in a good country', he later said, 'and I wanted to stay here'. By the time he was naturalized in 1911 he had Latinized the spelling of his surname to Laurantus. He was then a short, good-looking young man with alert brown eyes and an outgoing personality. Frugal and hardworking, by 1913 he had saved enough money to buy the café in partnership with an American relation and to establish Laurantus & Co. He sent for George, who was to be a partner in many of his later business ventures.

In 1914 Nicholas Laurantus acquired the lease of the Albion Hotel at Young. At St John's Anglican Church, Cowra, on 29 March 1920 he married Clare May Barker (d.1954), a 33-year-old housekeeper. Three hotels later, in 1921, he decided to try farming, and took his wife and baby daughter to a small wheat farm near Cowra. He chose a bad year and almost lost his money. In 1922 he moved to Narrandera where he acquired the lease of the open-air Globe Theatre, announcing his intention in the local newspaper 'to show before Narrandera audiences the best and latest productions in the way of moving pictures'. The Globe marked the start of a successful chain of cinemas across south-western New South Wales which he ran with the aid of George and other family members whom he brought from Kythera.

In 1938 Laurantus bought Windella station near Narrandera; he later acquired other properties, including Lake Midgeon station which reputedly had the largest shearing shed in New South Wales. In a few years he was very wealthy. One of his managers said of him, 'Nick was purely a financier but he did have this love of the land. His knowledge was such that he could look into the future and say, ''Wool's going to be good, so we'll grow sheep", or, at another time, ''Wheat's going to be good, so we'll farm country"'.

Laurantus went out of his way to advise young Greek immigrants and assist them financially. By breaking out of the café circuit and venturing into cinemas, hotels and grazing, and by being completely at ease in both Greek and Anglo-Australian society, he set an example for other Greeks: if they learned English, mixed with Australians and worked hard, they too could succeed. At the same time he felt that Greek immigrants should know and love their own language and culture. In 1968 he gave $100,000 to establish a chair of modern Greek at the University of Sydney. During the 1970s he donated about $450,000 to St Basil's Homes in Australia for aged people. Lourantos Village at Lakemba was named after him.

Appointed M.B.E. in 1977, Laurantus was overjoyed to be knighted in 1979 and described his investiture at Government House, Canberra, as the happiest day of his life. From 1968 he had lived in Sydney at the Masonic Club. A frail but stubborn old man, still fond of jokes and good company, Sir Nicholas died on 26 July 1980 at Greenacre and was buried in the Greek section of Botany cemetery. His only child Helen survived him.

This article was first published in hardcopy in Australian Dictionary of Biography, Volume 15, (MUP), 2000


To purchase Portrait of Uncle Nick; a biography of Sir Nicholas Laurantus MBE

Credit Cards accepted over the phone, fax, or email!

To purchase by mail, make cheques payable to KAA – Kytherian World Heritage Fund, and post to: