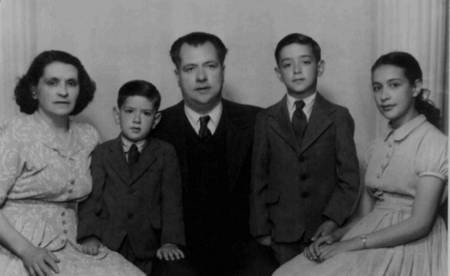 My uncle, Emmanuel Theo Peter Georgopoulos, pronounced "Yeoryopoulos" - Manuel Georgopoulos, known as Manuel Poulos, arrived in Australia in 1921. He spent 18 months in West Maitland, 3 years in Kempsey, 1 year in Casino, with brother Peter, before returning to West Maitland, in early 1927. He then moved to Kempsey for about 12-18 months, were he worked for the Motte Bros, and then returned for a short time to Casino. In 1928, he aquired the ABC cafe, at Gilgandra.

In 1934 Manuel wrote to Mum in Potamos, Kythera, asking her to join him in Gilgandra, Australia, to come and help run the ABC Cafe. She acceded to his request.

In 1939, in a trip to Bombala, Mum met, fell in love with, and soon married Paul Yiannakellis), abbreviated to Kelly. Dad was from the Greek island of Mytilene, also known as Lesbos, which lies in the eastern Aegean Sea, near Turkey. The wedding of Paul and Chris was one of Australia's "celebrity" weddings of the 1930's, and was covered intensively and extensively by Movietone News. CD and DVD copies of the original Movietone coverage have survived.

Mum and Dad assumed control of the ABC Cafe in 1939.

Dad died suddenly and unexpectedly on the 3rd of May 1961.

Mum remained in business in Gilgandra until the 1980's.

For a photograph of the Kelly family in the mid-1990's

For, Robyn Waltons appraisal of my mothers' and the ABC Cafe's influence on the town of Gilgandra

For a comprehensive history of the Kytherian presence in Gilgandra