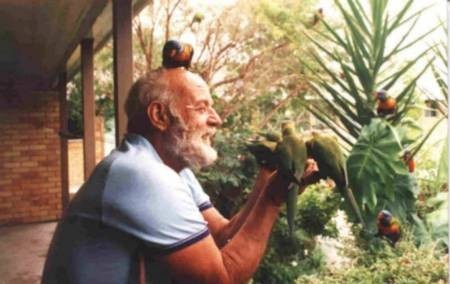 Theothosios Koroneos - Theo Corones - was sponsored to Australia, as a youth, by his maternal uncle George, and aunty Georgia, later of Beverley Hills.

He lost a leg to an infection in his early twenties.

Part of his rehabilitation involved art therapy. He later became quite a famous artist in "Kytherian" circles.

He settled in Sydney, and drove cabs for many decades, before attempting later in life to re-establish himself in Karavas, Kythera.

He returned to Australia, and retired to the North Queensland coastal town of Bargara.

This photograph was taken in Bargara.

Theo had a great sense of humour and an infectious laugh. He was a "soft-hearted" man. He was extremely good with children and animals. (As this particular picture attests. The rainbow lorikeets in the picture are "wild".)

As a child, and throughout my life, it always made me feel good to be around him.

My brother Phillip, and many of my cousins, including George Krithari, and his sister Ioanna (now, Armenis), and Betty Coroneos, (now, York) - shared this deep fascination with him.

Despite being the opposite of the quintissential "solid", business-oriented Kytherian prototype; which all good Kytherians were meant to aspire to - he commanded a great deal of affection from many Kytherians, and many Australians, of all ages.

Theo as a groomsman at his Uncle Dimitri's wedding