Photos > Diaspora Vintage Portraits/ People > To Crete with love: a thank-you for bonds forged in war

To Crete with love: a thank-you for bonds forged in war 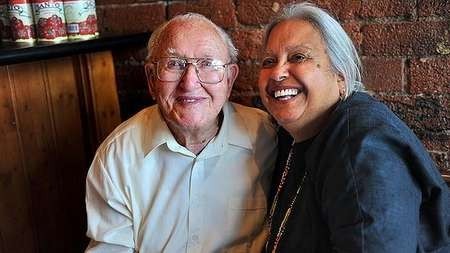 ''I'VE GOT a lot of kisses for this man,'' says Glenda Hume, planting another one on Leslie Manning's cheek. Ms Hume is the eldest surviving daughter of Reg Saunders, the first Aboriginal to be commissioned as an officer in the Australian Army.

Mr Manning, 99, served with Mr Saunders in the Battle of Crete in World War II. The two fought in 1941 as members of the Australian 2/7th Battalion, sent to defend Crete from Nazi occupation, and though they only met a couple of times, Mr Manning says: ''He was a very companionable fellow, Reg. Everybody liked him.''

While Mr Saunders, a Gunditjmara man from south-west Victoria, was fortunate enough to be protected from the the Germans by Cretan villagers for 11 months following the battle, Mr Manning unwittingly approached a Nazi boat a week after the conflict and spent the next four years in German concentration camps. Thursday marked the first time Ms Hume has met one of the soldiers who fought with her father in Crete.

Ms Hume and Mr Manning met for lunch at Philhellene Greek restaurant in Moonee Ponds, ahead of a fund-raising concert at Federation Square on Friday night by the Xylouris Ensemble. Headed by celebrated Cretan lute player Yiorgos Xylouris, the ensemble of local and Cretan musicians will pay tribute to the Australian soldiers, such as Mr Saunders and Mr Manning, who fought in Crete in 1941.

''We were very happy to take part and say thank you to the people who were there to fight side by side with us, for freedom,'' says Xylouris.

The owner of Philhellene - whose walls are decorated with pictures of the Anzacs in Crete - and vice-president of the PanCretan Association of Melbourne, John Rerakis, suggested the ensemble play at the event. ''You hear about Gallipoli, but you never hear about this,'' he says. ''It's a story that needs to be told.''

Profits from the concert will go towards building a ''42nd Street'' memorial in Chania, Crete, named after the strip on which the Anzacs, on a rare occasion, forced the Germans to retreat, enabling Commonwealth troops to evacuate from the south coast. The memorial was the brainchild of Ms Hume, who, touched by a visit to Crete in 2010 to meet the family who had protected her father in 1941, decided that something needed to be done to commemorate the bond between the Anzacs and the Cretans.

The site has been left unmarked for more than 70 years. Ms Hume hopes the concert, in which her cousin, Richard Frankland, will also perform, will raise the $20,000 needed to make and ship the bronze memorial plaque.

''When you've got it, you don't lose it,'' she says of the bond forged between her family and the Cretan villagers. ''The family that looked after Dad - their mother - he described her as the bravest woman he'd ever met,'' she says. ''What she did for all those soldiers and the way she risked a lot - he saw in them what he saw in his own family. That's what his own mum would have done and what his Gunditjmara people would have done.''