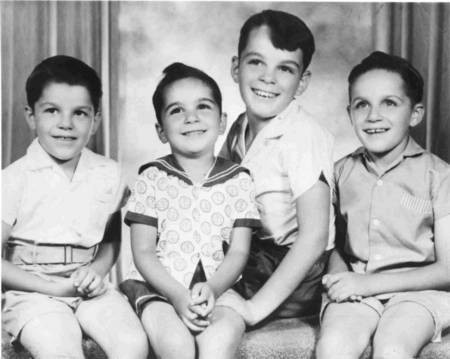 By Kytherian custom, the second oldest child should have been named Phillip - after Evangelia's father.

However the second born child, Olympia, a blue-eyed, black-haired girl, had died in her first year from a "mystery" respiratory tract infection. In order to provide her next-born with "added" protection, Angie called the child Panayoti, after the Panayia - contravening the Kytherian convention for naming of children.

Although never one for actively assimilating, she was also very conscious of de-Greeking names - and wouldn't countenance calling Phillip "Rose", (or even "Ross"), or Eric "Theo". Arriving at Eric from Theothericos - was quite creative.

As outlined elsewhere in a comprehensive summary, there has been a Kytherian "presence" in Gilgandra from 1910, through to virtually the end of the 20th century.

As discussed at numerous other entries on Gilgandra, from the beginning of WWII, until mid-1975 - Gilgandra, population, 2,900 - was a very Kytherian town.

5 families - the Pentes, Sklavos, Kelly ((Yiannakellis), (wife Chris, a Yeoryopoulos, from Potamos), Psaltis (Protopsaltis), and Poulos (Tzortzopoulos) - lived in close proximity to each other - culturally, residentially, and commercially.
A decade later, the Logus (Logothetis) Family, would complete a cycle of 6 long-standing Kytherian families resident in Gilgandra.

I cannot recall our family owning a camera during our childhood, and as a result we have very few family photographs.

The story of how this photograph came to almost not be taken, has a "Kytherian" twist to it. A travelling photographer had set up a temporary studio across the road from the ABC cafe. His fees were not cheap.

My Mum gave a wry chuckle when we were discussing this photograph recently. She told me that she had to argue long and hard with my father to be allowed to spend the money to have it taken. (Can't make a profit on family photo's - like you can from milkshakes, lettuces, and mangos!)

This entry is meant to induce the other Kytherian families of Gilgandra to submit similar school-age photo's to kythera-family.