Photos > Cafes, Shops & Cinemas > School children line up for the opening of the Saraton Theatre in 1926 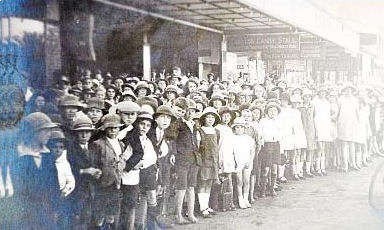 Photograph included in an article entitled, Lights, Cameras and Plenty of Action, on page 2 of a 24 page Liftout to celebrate the "
re-opening of the refurbished Theatre.

The Liftout can be downloaded here:

You can read all remaining articles in the Liftout.

After its grand reopening on November 23, 2010, we look back at the Saraton Theatre’s (Grafton, NSW) history, and the special place it holds in our hearts

Throw yourself back to 1926. Joan Sutherland (the late opera diva Dame Joan) is born. So too is Jack Brabham (later knighted for his motor racing exploits). South Sydney Rabbitohs defeat University to win the NSW Rugby League premiership, a horse called Spearfelt lands a colossal betting plunge to win one of the most controversial Melbourne Cups on record, and back in the Clarence Valley, Cyllene Laddie, ridden by T Farthing, takes the Grafton Cup.

The cup carnival aside, Grafton was at the centre of attention as Mayor WT Robinson officially raised the curtain on the new Saraton Theatre on July 17. Alderman Robinson told an excited crowd at the opening that Notaras family members were to be applauded for providing the entertainment centre.

He said the occasion only went to show there were at least some men in the district who appreciated its value and were prepared to put in all they could to make Grafton a better place in which to live. “I hope it will be an example to many others who were reluctant to spend their money on progressive ventures to make this part of the state more attractive from the point of view of up-to-date institutions,” the mayor said.

Big screens everywhere were showing enthralling movies featuring the Hollywood stars of the time – including the swashbuckling Douglas Fairbanks, the sultry Greta Garbo, heart-throb Rudolph Valentino and the sweet Mary Pickford. For a time in the ’30s fire damage brought the curtain down on the screening of movies. Instead, the Saraton was home to dances, concerts and social functions.

The Notaras family bit the bullet in 1940 and had the interior completely remodelled to produce what was described at the time as “an ultra-modern luxury theatre on the lines of the metropolitan picture shows”.

The fact World War II had broken out just 10 months before was not lost on Country Party founder and brieflyPrime Minister, Sir Earle Christmas Grafton Page, who had the job of opening the magnificent new cinema complex. He emphasised the importance of providing entertainment in times of conflict, saying one of the three principles of winning wars was to keep up the spirit of the people.

“Men and women are better able to work hard and continuously if they are entertained,” he said. “I am sure that in these times we will think clearly, work better, plan straighter if we mix work with amusement, and therefore I am glad to open this place of entertainment.”

Sir Earle Page’s comments, made the day before the Battle of Britain began, flew in the face of calls by patriotic conservatives to close down theatres and cinemas, claiming they did not contribute to the war effort. Records show Grafton and South Grafton had, at some period, at least seven theatres that were being individually used for the showing of movies.

According to the Heritage Council, only the Saraton Theatre remains as representative and symbolic of a time when attending a picture theatre was the principal passive recreational activity of the general population.