Visit of 47 members of AHEPA, Sydney, to the Roxy Complex, Bingara 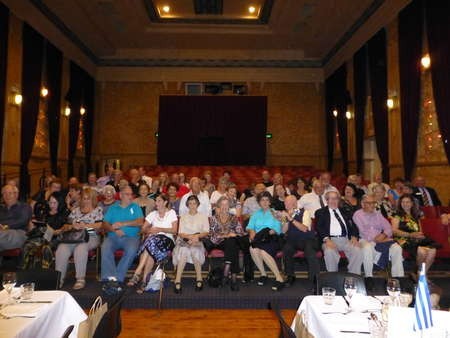 On the 23rd February, 2013, a 47 strong contingent , mostly members of the Australasian Hellenic Educational Progressive Association, (AHEPA), travelled by coach, on a Greek-Australian pilgrimage and heritage tour to visit the Roxy Complex, Bingara.

They left Sydney at 7:00 am, stopped for morning tea at Maitland, and for lunch at Tamworth.

They arrived in Bingara at about 5:00 pm, booked into their accommodation, and then attended a civic reception provided by the Gwydir Shire Council, at the Roxy complex.

Between 5:30 pm and 6:00pm, drinks and canapes were provided in the Peters and Co, Cafe - the Roxy Cafe.

Members of the Roxy Museum Committee, then took groups of ten on a tour of the complex, explaining the significance of various areas, including the Cafe, the Tourist Information Centre, (once the site of Archie Kalokerinos's medical practice), the Trade Hospitality Training Centre, and the Roxy Museum of Greek Immigration in rural NSW and Queensland. This is located above the Roxy Cafe, and is accessible by stairs and a lift.

At 7:00 pm, AHEPAN's, the Roxy Museum Committee, and other invited dignitaries and guests, including Mayor of Gwydir Shire Council, John Coulton, and one of three Patrons of the Roxy, local resident and Roxy visionary, Nancy McGuiness. A second patron, Peter Prineas, OAM, was also present. Peter is a member of the Museum Committee, and the curator of the Museum, as well as author of the book Katsehamos and the Great Idea, the history of the inception of the Roxy complex. Peters' grandfather, was one of the three Kytherian immigrants who built the Roxy complex in 1936. The third patron, John Wood, actor, could not attend the evening.

As the 'pilgrims' entered the Roxy Cinema they were collectively overwhelmed by the sheer beauty of the 'picture palace". Exclamations such as "this is unbelievable", "this is so incredibly beuatiful", "how did they manage to preserve this"? were audibly expressed.

They were then seated for dinner, during which a number of speeches were made. Con Fardouli, long term cafe owner from Inverell, acted as the Master of Ceremonies.

Councillor John Coulton, Mayor of Gwydir Shire Council, welcomed the pilgrims and guests to the town of Bingara and the region.

Sandy McNaughton, Roxy Manager, then provided an informative history of The Roxy complex, and iots role in the town and district.

Download a .pdf version of the Timeline, The Roxy complex, Bingara, here:

John Theodoridis, President of the NSW Chapter of AHEPA, spoke warmly about the Roxy, and of the persons who had the vision and capacity to preserve and maintain the building. John also presented to Roxy Museum Curator, Peter Prineas, a substantial wooden plaque, which "commerates the visit of the Order of AHEPA, NSW, to the Roxy Complex, on the 23rd February, 2013". John also presented to mayor, John Coulton, a cheque for $1000, as a contribution towards the establishment of the Roxy Museum.

Tasha Vanos, a Past National President, AHEPA, and Chairman of the AHEPA Medical Research Foundation, the chief organiser of the visit, spoke about his pride to be in the Roxy complex, and how important it was that such a place had been preserved.

Whilst the speeches were delivered, an exquisite meal was served by the proprietor of the Roxy Cafe, Mr Vio Nedianu, along with wife, Ayesha, their children, and members of their staff.

Download a copy of the AHEPA Evening Meal Program, here:

The AHEPAN's were thrilled by their visit, and by the evening.

Christine Lynch, National Vice-President of the Order of AHEPA, Australasia later made the following comments about the visit and the function.

"We felt we were part of history- a “living history”. Everybody thought it was wonderful. We all felt very privileged. We were thrilled to be part of it. We were treated like royalty. The evening itself was ‘magic”. The whole Roxy complex is “magic”. We all look forward to coming back. Particular after the Roxy Museum is completed".

Tasha Vanos's assessment of the 'pilgrimage' and the hospitality received by the AHEPAN's echoed that of Chrisytine Lynch.

"The whole event was a “total success” as far as the 47 participants on the bus were concerned. We were amazed at the hospitality. The Roxy Museum committee were a wonderful group of people. The organisers and Sandy McNaughton in particular had obviously put a great deal of effort into the evenings. The gift packages we all received, which promoted the Roxy complex and the town of Bingara were exceptional, and deeply appreciated.

We were amazed at the Roxy complex. It’s wonderful. It’s a credit to Gwydir Shire Council for the commitment they have made to preserving this heritage building. As Greek-Australians we felt were made to feel very proud.

The evening function was one of the most exciting and entertaining that members of AHEPA had been to for years. The entire group felt like they had been treated like royalty.

The organising of the activities for our group in Bingara was outstanding.
We thank all members of the Roxy complex and Roxy Museum committee .I have received wonderful comments from our fellow travellers. It was a credit to the group of dedicated people who must have worked so hard to give us a royal time.

The support I received form Sandy McNaughton was great .
The food was most enjoyable and the company was excellent.
Thank you to all our new friends".

Download the history of the Roxy article as a .pdf: