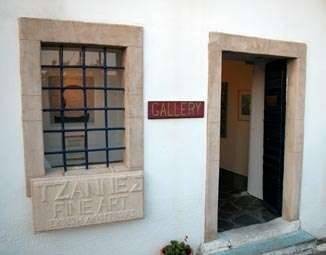 Tzannes Fine Art Gallery, located on the Island of Kythera in Greece, exhibits the work of Greek-American artist George Tzannes from June through October. The work is of Kytherian subjects in various media, including acrylic painting on canvas, board and paper; oil painting on canvas and board; original, limited edition lithograph and silkscreen prints; pencil, watercolor and mixed media on paper; sculpture; and cement fresco. When not in Greece, the artist lives and works in New York City. This web gallery brings together artwork from both places.

[I am still searching for a photograph of George Tzannes.

Can you help to provide photographs to fill this current (June 2004) deficiency? - GCP.]

For further information on George Tzannes, including a picture gallery.

In 1971 New York artist George Tzannes first visited Kythera, where his father was born. Since that time, the idyllic island has become the exclusive subject of his work.

Tzannes studied drawing at the Art Student's League, and fine art lithography at Pratt Graphics Center and The Printmaking Workshop in New York City.
Over the past twenty years Tzannes has made frequent and extended visits to Kythera with his family. His works of Kythera have been exhibited throughout the United States, in Canada, and in Athens. In recent years he has established a studio/gallery on Kythera.
______________________


REVIEWS
By Dora Iliopoulou-Rogan
In Kathimerini, Athens 9/25/83
George Tzannes, in his work inspired by Kythera, reveals a dynamic talent. In every one of his oil paintings, monotypes and lithographs exhibited in ORA Gallery, the artist has created a composition which is a true experience for us. Evidently this Greek-American artist is deeply touched by the landscape and the atmosphere of his father's homeland. He visits Greece often and stays for some time in Kythera, where he paints for hours without any distractions.

He has succeeded in decoding something important and absolutely essential from the 'climate' of the place and the enchantment it evokes in the Monastery of Myrtidiotissa which he has pictured, or rather orchestrated, with a characteristic directness and knowledge of the particular atmosphere; in the olive trees as well as in the other trees of the island that erupt with a unique freshness from the implicit variations of green; in the goat, in the inner courtyard; in the slightest architectural detail. In the landscapes inspired by Hora, in Kapsali, in the church at Paliohora, in the landscape with ruins, in the "White City", in the imposing doors, in the windows, in the fields and valleys and trees, Tzannes has decoded, isolated and captured something of the essential enchantment of nature in its most attractive and simultaneously fundamental state, so as to project it with an intense tension.

Beyond this, the artist has interpreted every stimulus with a characteristic sense of metaphysics. Looking at the trees, their branches, and the smallest bush right next to them, we feel that something essential has been absorbed here from the cycle of cosmogony. And it is precisely this ability of the artist, beyond his artistic perfection, that moves us most in his works.

The works with the theme of Hora, Kapsali, a monastery or a church, substantiate his talent for composition and the faultless instinct with which he creates the volumes of the buildings, molding them through a special lighting. As a genuine spirit of optimism emerges from his works, we share his inspiration just by looking at them, and most important of all, this spirit stays with us for a long time after we have stopped looking at them.

Translated from Greek by Marianna Halkia